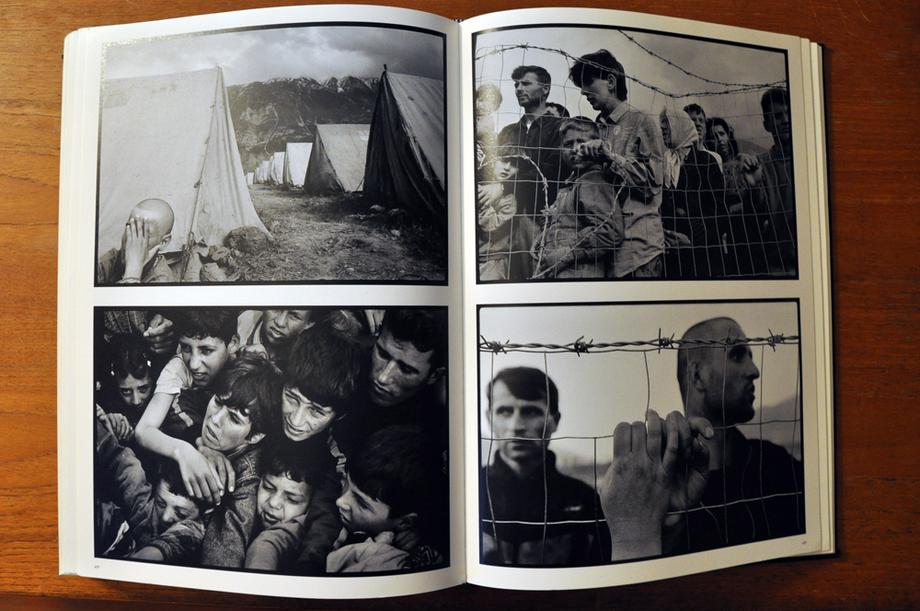 At the new Holocaust History Center at the Jewish History Museum, I was very struck by a quote from Walter Benjamin: “For every image of the past that is not recognized by the present as one of its own concerns threatens to disappear irretrievably.”*

This quote elegantly justifies the creation and access of work by documentary photographers like James Nachtwey. After watching the innovative film War Photographer, I acquired his one and only monograph, Inferno. The latter is a book that one must tread lightly, yet treat with the utmost respect. The book itself is an imposing few pounds. Open it, and discover large spreads of his black-and-white, gritty 35mm images blown up. Some blank pages are dispersed throughout, perhaps to give the reader a breather from compassion fatigue.

What separates Nachtwey from other photographers on the line is his fearlessness and intimacy with his subjects. He confronts violence, and the trust he is awarded by people in distress shows in his work. Despite the gravity of his situations, his pictures have beautiful compositions. In the introduction, Luc Sante says: "It is disquieting to notice, though, that Nactwey's pictures are always compositions. Maybe we expect that the photographer faced with grief, trauma or starvation will be rendered incompetent by the sight [ . . .] But maybe we are just projecting, wanting the camera to fall away just as we would. [ . . . ] he is probably incapable of taking a bad picture, but also and more importantly because he is honest and clear in his stance." Nachtwey takes many pictures without human subjects, more so than other war photographers, an his images of their traces (footprints in the snow, remnants of where carcasses lay) are intriguing abstractions.

At the end of the film, Nachtwey shows the letters he has received from the magazine readers and viewers of his work. One writer committed to donating money to a struggling family in Indonesia. In Nachtwey's essay in Inferno, he explains his raison d'être, and charges us to take--if not a proactive stance in human rights issues--at least an active listening stance.

Nachtwey's work is "meant to be one element among many in the ongoing dialogue between information and response that helps create an atmosphere in which change is possible. A photograph can enter the mind and reach the heart with the power of immediacy." He is not just idealistic; "The work of the press had a demonstrable effect on ending US involvement in Vietnam. The international community provided massive relief for the victims of famine in Ethiopia [ . . . ]"